Horror Movies: Can they shape sex education for adolescents? 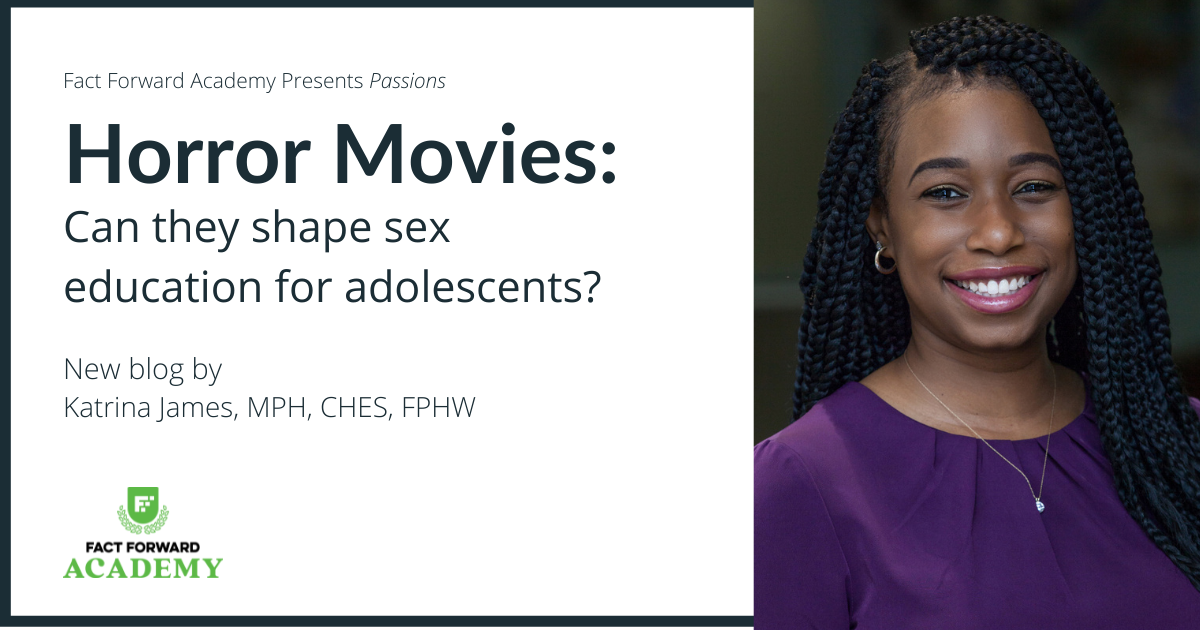 So many people love the arrival of fall towards the end of September. Autumn represents cool weather, pumpkins, pumpkin spice, football games, and many other things. However, my love of fall is for a very different reason. Trick or treating, Halloween costumes, and candy are among the traditions that make Halloween my favorite holiday. One of my favorite yearly traditions is watching horror movies during Fear Fest on AMC during which time movies are shown on rotation the entire month of October.

Since I have a passion for horror movies, I want to discuss the relationship between these films and sex.  In most classic horror films, teenagers are often sneaking around to have sex and they are typically killed shortly thereafter. I want to explore the themes seen in these films and how this can create fear and shape sex education for adolescents. A few movies that fit this theme include Halloween, Friday the 13th, Scream, and House of Wax.

Before I begin the discussion of these classic horror films, I would like to share some statistics regarding sex education in the United States, locally in South Carolina, and some teenager’s views on the sex education they are receiving.

Although sex education is mandated in South Carolina, parents have the option to opt their children out of receiving it. Many sex education lessons in the state are usually abstinence based.

According to Guttmacher Institute, 30% of teenage males do not receive any sex education before their first-ever intercourse. The rate is as high as 45% for teenage black males. These teens only get sex education from their peers and movies. The disadvantage is that it isn’t always wholesome information. (Dailard, 2016)

Although Scream is not my favorite horror movie, one of the characters in the film makes a great point which I will quote and share the YouTube link for the clip below.

“There are certain rules that one must abide by in order to successfully survive a horror movie, for instance, number 1, you can never have sex. Sex equals death” (Movie Clips)

The character explains that virgins survive and those who engage in sex are the ones who get killed. Honestly, I can think of many of my favorite movies, and this is a recurring theme.

In a specific article discussing gender and horror films, they discuss the “death by sex trope” theme and explain how historically the female in horror movies who has sex always dies. Meanwhile, the “final” female (who is typically a virgin) may be assaulted but usually survives. This led me to question what type of fear could be instilled in adolescents that view these movies. Additionally, if they are not educated or receive credible information this fear could help shape their opinions on sex.

According to Cowan & O’Brien, “Given the high-level exposure of young people to this message-those who are in sexually formative years, coupled with the sex equals death message surrounding AIDS, this message is particularly problematic. Slasher films reinforce the idea that female sexuality is costly., at least for females.” (Cowan & O’Brien, 1990)

In the classic film Halloween by John Carpenter, Laurie Strode is a virgin who is mocked for it by her friends. Interestingly, the same friends who are engaging in sexual activity ultimately die right after having sex. This could give an adolescent the message that sex may not be the best idea if they want to survive. While most adolescents probably would not take it to that extreme, this type of thought process could lead to negative beliefs about sex being bad or fearful if they are not properly educated.

In the remake of House of Wax, which is also one of my favorite movies, the character Paige Edwards and her boyfriend Blake are killed right before they engage in sexual activity. In another classic horror film series Friday the 13th, Jason Vorhees is known for killing teenagers who are engaging in sexual activity at a summer camp.

I believe that these movies focus on the cultural fear around sex and that it is taboo to discuss it in detail, even in sexual education classes. Fear is ingrained in some of these films and highlights the theme that some adults would rather enforce the idea that “sex is bad, just don’t do it” without providing further context.

Considering the reoccurring theme of these movies AND the role of sex education in the past, it appears that horror movies of today continue to follow the same formula: killing characters after participation in sexual activity. On the contrary, I do believe that sex education programs have progressed over time and current horror movies are not utilizing the fear factor in sex as they have in the past. We must acknowledge that the theme continues to reappear and remain in existence with classic remakes such as the Halloween franchise. One positive aspect is that horror movies highlight that sexual arousal can alter executive functioning/decision making skills, resulting in the demise of our favorite characters!

While I hope that one day sex education and horror films evolve to take the fear away from sexual activity, we can still enjoy them. Below you will find a list of my favorite horror/thriller television shows and movies. Happy Halloween All!